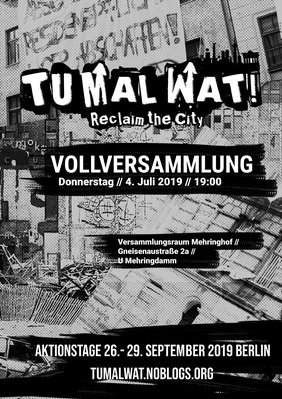 Assembly for the action days on 4th of July 7pm at Versammlungsraum Mehringhof (Gneisenaustr. 2a)

With the motto „Do some action – reclaim the city“ will be action days in Berlin from 26th – 29th September 2019. On 4th July will be an open assembly to inform you about the current situation of planning and our expectations for the action days. We want to inform you about ways to participate in the infrastructure as well as the actions. Also we would like to discuss the action scenario as it depens on your particpation in the action days. We are happy about people and groups who want to contribuet to our ideas, as well as people and groups who bring their own ideas. The action days invite you to get active!

10 golden years for concrete, 15 years privatization of urban apartments, 20 years lack of construction of social housing, 29 years Berliner Linie. On the side of the tenants this means: a decade with annual double-digit rent increases. The quality of housing is declining, and the proportion of our wages which go into paying rent is rising. But the burden is not just financial. Displacement creates fear among many and restricts social life.

While Berlin is increasingly turning into a smoothed concrete desert, the poorer sections of the population are panting from job to job in permanent stress in order to meet expected returns which are not without reason above the value which people can afford. Because displacement has a system: those who cannot meet the expected return should leave. Out of the apartment, out of the shop, out of the neighbourhood, out of the city. In the worst case, it means: getting out of secure housing conditions. The system has a name: Capitalism. In Berlin, the right to ownership of land has become the decisive factor in whether people can afford this city.

It is not only the investors who contribute to this, but also the state authorities: The police who evict, the court who brings forward an action for eviction, the deputies who come up with ever new ideas to regulate the market and to reject any responsibility in the event of
evictions.

But between malls, luxury buildings and regulated public spaces, we also find resistant moments and places. Along the question of ownership, individual tenants*, groups and residents* of entire blocks of houses, small businesses and social centres defend themselves. They not only refuse to leave their apartments, houses or shops, but also fight for a city from below in which all people not only have access to living
space, but can design their city together.

Some of these resistant moments were the occupations in spring and autumn last year. The material successes are modest for the time being. Only one living space remained in the Großbeerenstr. 17a. But the question of the legitimacy and necessity of occupations has moved back into the political discourse. More than half of Berliners find occupations and expropriations legitimate. Thousands took to the streets again this year to resist, and the cohesion of the population is growing. Nevertheless, this can only have been a first step in the right direction.

This is why from the 26 to the 29 September, an alliance of various groups wants to intensify the housing policy struggles with the “Do some Action Days”. Action days propose themselves, in order to combine publicly promoted meetings such as discussion rounds, workshops, film evenings and Solipartys with concrete practice. Thematically it is about the expropriation, the appropriation, the opposing and the preservation of spaces and places, in theory and practice.

Occupations can take very different forms: there are silent occupations, which are not made public, and “loud”, public occupations. In private or public space. In vacancies or luxury buildings. People can use public space for a few hours or barricade an apartment against the imminent eviction. Occupy new rooms or don’t let yourself be thrown out if you
have to give the key. One of the aims of the Action Days is to make this variety of forms of action visible.

This also requires a return to the existing diversity and the integration of former and ongoing occupations. Central here are the struggles of existing projects in Berlin, such as the Liebig34, the Potse, the Syndicat, the Meuterei and the Rigaer94, the prevention of
the threatened evictions and the new occupation of other premises.

For us, occupations are not symbolic fun actions, but a necessary practice of resistance. The fact that occupation is an effective form of action is taught not only by the past of the 80s and 90s and the resulting projects and movements, but also by the currently persistent resistance in the Hambach forest. Occupations create spaces within the
capitalistically organized city in which it is possible to counteract the increasing isolation of people with the idea of collective and communal living and instead build up and strengthen solidarity-based structures.

Resist: Occupy from 26 to 29 September houses, apartments, offices and public spaces. Fight for the preservation of threatened projects and for a city worth living in. We want to acquire this city practically. This is what you are all called upon to do.

The city belongs to us!